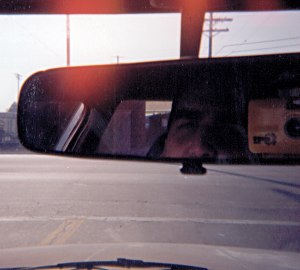 Luke Gattuso
Somewhere in the San Fernando Valley, California
cheap film, cheap camera, cheap photographer
Hey! The 99 cent store had cameras and film! I had to try them both out. The film and camera were both mystery brands (although the packaging for the camera stated cleary "NOT A TOY!").
I took a bunch of junk pictures just to see what the camera could do. It had surprisngly sharp focus- I have some pretty cool shots of asphalt- but left wide red stripes across the top of most pictures. Light leak, I guess. This was taken as I was driving to Costco to drop off the film. I paid more for developing than I did for the camera and the film combined.
⇦ go back to that other thing | surprise me | tell me more ⇨