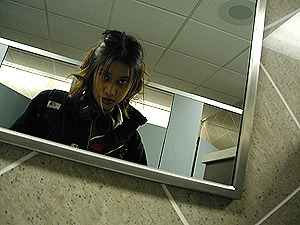 Glenda Bautista
Cincinnati, Ohio
Baggage
During a layover in Cincinnati/Northern Kentucky International Airport, I walked into the bathroom to look at the expression on my face. I had just found out that my ex-boyfriend, whom I had previously spent three years with, gutted me an issue of Details Magazine that month.

I was looking for Details at the airport newsstand specifically because he had told me he was interviewed for an article back in June, after our break-up. Seeing as it was September and I'd been looking for the article in print since, the curiosity of seeing what he had said surrounded me.

I read the article, and although the names were changed in it, I knew he was talking about me. Though there was a three month buffer from when the article was researched, written, and then published, I felt was if my past were coming back to haunt me, regardless of how far I had travelled geographically, or how I hard I had tried to move into the future without him. The issues seemed to run after me and suck me back into my painful past when I wantedto leave them behind me.

It was a surreal and powerless moment in which there was nothing you could say or do to take it back, regardless ofhow accurate I thought the article was, and regardless of how the writer from Details had left out the finer details -- my side of the story. In addition, I'd be stuck on a plane for another couple of hours to calm down, and then eventually reach my happy destination in a miserable mood.

I took a self-portrait in the bathroom after I had splashed water onto my face because quite honestly, this is how incredibly pissed I was.

I find it bizarre that U2's album cover shot for All That You Can't Leave Behind features the band standing in an airport.
⇦ go back to that other thing | surprise me | tell me more ⇨