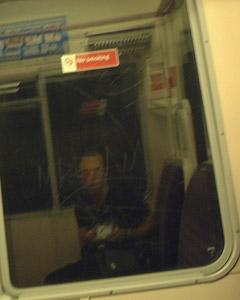 Christopher Robbins
East London Tube, underneath the Thames River
Under the river and my head hurts
I was alone on the train, with a a splitting headache. Coming home from afreaky but fun design event. We broke into groups of four designers and hadfifteen minutes to solve a design problem, from brief to solution. The whole"intereactionary" event was about the process, not the solution, so we hadto do all our quick thinking and sketching up in front of a crowd, fullymic'd so everyone could hear!

We invented a "GPS pulsating green orb for making nice social times." I'mbeing cryptic on purpose, because the description is much more fun if yousee it as a story. I'm fleshing out the idea into a comic-like scenario thatI'll put up at www.grographics.com in a few weeks. (You'll have to scrolldown to the far right where it will say "Ideas in process.")

After the event, we went off to a pub where we got pissed just enough togive me a nice, solid headache.

And riding home underneath the Thames, playing with my new little digitalcamera and listening to "Sweet Transvestite" from the Rocky Horror PictureShow on the included MP3 player, I decided to photograph my head-achey headin the reflection of the dark train window.

I was feeling giddy from meeting a group of flamboyantly fun designers, andwishing my head didn't hurt so much.

The walk home along the Thames managed to clear the ache from my skull. Tooka lot longer than usual because I kept stopping to jot ideas about this orbinto my little blue notebook.
⇦ go back to that other thing | surprise me | tell me more ⇨