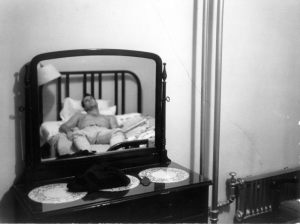 Gary Molitor
Long Beach, California
$2.50 a Night
I don't want to say what year this was taken, but there haven't been any $2.50 a night rooms in Los Angels for a long time.
I was a young art student working my way through college. I got a job on Catalina Island (teenage play ground off Southern California). The job was at the Westerbrook Hotel owned by "Blacky" Schtan.
It was a sweet job and the first away from home. My duties included maid service, laundry duties and security. I took the train ($12 ride) from Oakland, California to Southern California and planed to take the a local bus to the boat for the 22 mile crossing to the island. The year before my father, brother and myself spent a couple of weeks fishing and SCUBA diving on the island while staying at the Westerbrook Hotel. I got to know Blacky and liked him. Anyway, the train ride down was a little late and I missed the last boat out of Long Beach. I walked around for a while until I found a cheap hotel in the seedy part of town.
The room was clean and so were the sheets. It looked like something out of a Humphrey Bogart movie.
I had my fathers Kodak "Medalist" which used 620 size film ( I was taking a series of photographic classes with Jack Welpott ).I set my suitcase up endwise on a chair, placed the camera on it, set the exposure from my light meter and set the auto timer. I laid down on the bed and waited for the timer to release the shutter.The photo really caught how I felt at the time ... alone in a strange town and a little lost, yea, but who hasn't felt lost when they were 21.gm
⇦ go back to that other thing | surprise me | tell me more ⇨