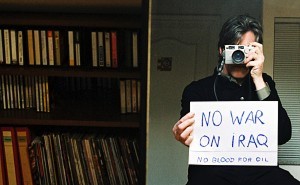 Balthusar Alvarez
Oviedo -where else!-Northern Spain
No Blood For Oil
Mirror Project picture number 12636 shows my first "No War on Iraq" contribution.(Perhaps the first ever in the Mirror Project?!!)Five hours ago, I attended a massive anti-war rally in my hometown, OVIEDO, Northern Spain, Europe. There, thousand of people gathered to show that we care, that peace is possible, that this is not our war, that this is nobody's war but Bush's and his Administration's. The same happened all over "Old Europe", where millions of people took to the streets. As the pictures I took must still be processed -I don't rely on digital yet-, I felt that I had to contribute to the Mirror Project with yet another anti-war picture. It is now two in the afternoon in New York and the Peace March is under way. Still eleven in the morning in San Francisco.

NO WAR ON IRAQ! NOT IN MY NAME!PAREMOS LA GUERRA ANTES DE EMPEZAR.
â‡¦ go back to that other thing | surprise me | tell me more â‡¨