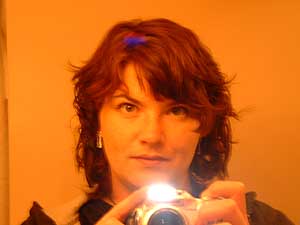 Cara
Oakville, Ontario
Orange Oakville
In my natural state, I'm out of focus and bright orange.

I had just flown across Canada (from Vancouver to Toronto). I was finally tucked in at a motel room in Oakville, enjoying the type of luxury that comes in the guise of a rusty, leaking shower and a 50-flowers-per-square-inch design scheme. It also smelled a bit like body odour, and I was jet-lagged, and all was closed at 11pm Oakvillian time even though it was only 8pm in my head, and I was trapped in a flowered room with a diet cola, a day old newspaper, and I started to pace. I digress. The last thing I'd read online before leaving Vancouver was an article about the Mirror Project, something about the type of naturalness that comes through when a person takes their own pic in a mirror. I took out our new digital camera, and gave it a shot to see what it would reveal.

Au naturel.
⇦ go back to that other thing | surprise me | tell me more ⇨