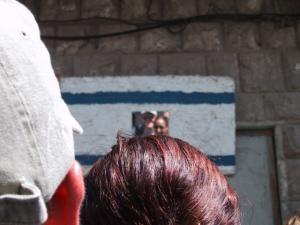 Scott Ruthfield
Wadi Nisnas, Haifa, Israel
Wadi Nisnas is a unique neighborhood, both because of its diversity (Jews, Christians, & Muslims live together peacefully) but also because it's a living art studio -- the neighborhood is covered with sculptures and visuals everywhere. Here, I'm taking a picture of me and Liat in an art piece -- an Israeli flag where a mirror has replaced the Star of David. (I'm on the left.)

Liat is an Israeli soldier. Nineteen years old, she's traveling with our group so that we, 21-26 year-old Jews from the US, can learn what it's like to go to the army instead of college, to know that you're going to spend several years defending your homeland and your people against terrorism, politics, and history, and to show that, in the end, she was a normal girl -- with a gun and a whole other life.
⇦ go back to that other thing | surprise me | tell me more ⇨