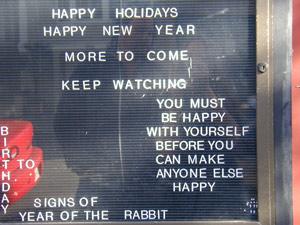 Tara Cairine Shea
San Francisco, CA
You must be happy with yourself before you can
Matthew Rossi's description:

You can learn a lot about how you really feel by looking back and seeingyourself reflected.

The day had been amazing, one of the best of my life. We'd met in a crowdnear the Powell Street BART and made our way to the garage, where she'dhad the uncanny fortune of finding a parking spot right near the elevators.The whole day seemed to unfold like that: we'd dallied in a British foodstore near where she worked in San Carlos, where I bought a bag of Cheddarand Onion Crisps and ate them entirely because I knew how bad they wouldtaste and she laughed, saying she understood that completely. We stoppedat Mollie Stones and looked for something to drink and all I could see washer.

Of course I feared saying anything. Even when we went to the park, and shespread out a blanket on the grass so that we could sit and talk, I filledthe air with stories about inconsequential things. About my dog, about thetime I tried to emulate Evel Kanevil (I have no idea how to spell his name,unfortunately) by jumping my dirtbike over a pile of cars, about my yearswandering around doing various and sundry. She told me about her trip toAustralia, about almost dying the day she came back in a car accident, aboutwatching a friend catch a car on fire while she was in it.

The whole time, I was literally imprisoned behind the lines of her iris.I kept staring. I couldn't help it. I tried to stop, and it was useless:I was no more in control of my eyes than I was the wind, or the people aroundus.

We went to eat, at a Barney's in the city. I was literally being pulledaround by a sensation like a wire in my chest, centered on her. Where shestepped, I was almost dragged. I ate, surprised by the quality of my hamburger,and finally the topic came up as she mentioned a recent trip to a concertwith a man she knew.

"Oh, is he that crush you asked your co-worker about?" How I kept my voiceeven when I could feel blood collecting in my face, I have no idea. I triedto look away from her, but as they had all day, my eyes sought hers, asif they were already sure of the answer.

"Is it me?" I know I swallowed audiably. It was the question we had notbeen dealing with, the idea that we were anything but two recent acquaintanceshanging out. "I'm sorry if it makes you uncomfortable, but I need to know."Well, in truth I stammered and had to repeat the whole thing, but that'shard to type properly.

The rest of the conversation is at once burned into my memory and impossiblefor me to explain. I told her immediately that I felt much the same way,as we left the restaurant and began walking up the street to her car. Itwas awkward, of course, and as we drove through the city it got a bit betteras we talked about what was happening. She told me she couldn't get whatshe was thinking out in words. I told her I was probably falling in lovewith her. She said that I kept saying things she was about to say.

We went up a hill, but my insides climbed instead of falling. Everythingoutside was a blur. We parked the car, walked around, talked about how muchthere was to talk about and how hard it was to know how. And then we stoppedin front of a sign. It bore the legend 'You must be happy with yourselfbefore you can make anyone else happy' and we stood there for a moment,just looking at it.

"Take a picture," I suggested, knowing that she had her camera, unawarethat the reflection in the glass would tell more about us in that momentthan anything about the cute legend.

Because even in the glass, I am looking at her. I know now, looking back,that I was already deeply in love with her, even though we hadn't said ityet. I can see my gaze looking at her reflection, following the contourof her face the way I seem helpless to deny whenever I see her, the lineof her long hair trailing down her shoulders as she aims the camera. Andfloating in between, the blazingly white letters spelling out the phrasethat seems to symbolize my behavior.

Which I will, because I am helpless to do otherwise, and because she isas compelling as the sun dropping below the horizon, as luminous as thesilver-white orb that bleeds blue light onto the world at night, and aswicked as a song sung in a small room by a smiling trickster.
⇦ go back to that other thing | surprise me | tell me more ⇨