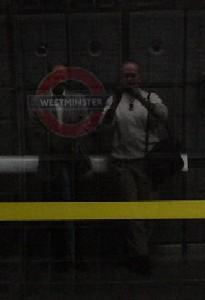 Peter George
Westminster Station, London, UK (N51.50138 W0.12483)
Going Underground
Deep under the streets of London runs a train network which dates back to the Victorian era. One of the deepest lines is the Jubilee line - originally part of the Bakerloo and extended in 1977 to stretch under the Thames and out to the new developments going on in Docklands.

I was at Westminster Station with my father and as we stood waiting for the train we caught our reflections in the glass doors which are a safety precaution being put in front of the tracks at all new and refurbished stations.

The picture was taken with available light which is why it looks so dark, but look closely and you can just make us out.
⇦ go back to that other thing | surprise me | tell me more ⇨