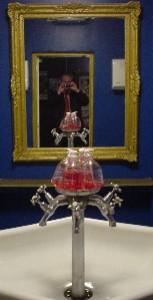 And if you think you have heard of Troubadour before, you probably have. It is the place where Jimi Hendrix, Joni Mitchell, Bob Dylan and Paul Simon all played in the 60s.

It is also where Private Eye was first produced and distributed; where the early Ban the Bomb meetings were held (the precursor to CND); and where the Black Panthers met when they left Paris after the '68 riots.

Nowdays it is just a great place to meet friends and have a drink!
⇦ go back to that other thing | surprise me | tell me more ⇨