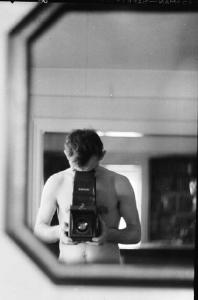 Sam Robinson
Probably upstate New York, but I'm not certain
Uncle's Self Portrait (late 1930's or early 1940's)
"After my uncle passed away at the age of 92 a few years ago, my father asked if I knew where he could get negatives turned into positives, for not much money.
I had just bought a scanner that could scan it negatives, so I told him I could do it.
It turned out that my uncle had been an amateur photographer and my father had found over 100 negatives with no prints while cleaning up after my uncle's death.
The picture you see here is the result of scanning in one of those negatives.
Other negatives included pictures of my mother and father before (or just after) they were married, my Aunt and Uncle's wedding, my Aunt posing in a two piece bathing suit. I thought it was very risque for the time, but my Aunt and Uncle liked it and used a copy for an invitation to an anniversary party!" Ken Robinson
⇦ go back to that other thing | surprise me | tell me more ⇨