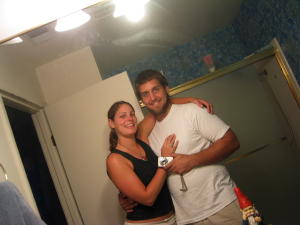 John Carleton
sunnyvale, ca
engaged
8/17 - we're engaged! i asked her yesterday, and she said yes! figured we should take a mirror project shot to commemorate the experience. =^) and of course, my little buddy gnomar had to be present to share in the moment.

oh, you want to know how it happened?

my fiance sheelagh is not a huge jewlery fan, and she's always said she wanted a small engagement ring. i'd always tell her not to worry, that i was going to get her a ring out of a box of cracker jacks, and that had better be good enough for her. ;-p

i finally bought the ring, and decided on a plan of action - i bought some cracker jacks at safeway, and openend them up, put the engagement ring inside the prize package and sealed it all back up.

that night after dinner and a movie, we were on the couch looking at paint swatches for our new house, and i announced that it was time for dessert! i grabbed the box of cracker jacks and opened it up, grabbing a handful and passing it to sheelagh. she also ate some, and we discussed paint normally (w/ my heart racing and pounding two hundred beats a minute) until we got to the prize. i made sure she got it in the next handful of jacks...

so she opened it (not thinking too much of the scotch tape holding it together) and the ring came out. she saw it, and then she SAW it! it was great...i wish i had a video of her face. i said, "i always told you i'd give you a ring out of a box of cracker jacks!"
⇦ go back to that other thing | surprise me | tell me more ⇨