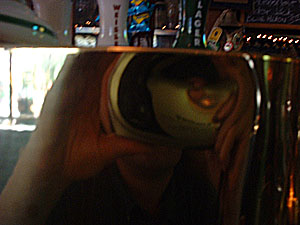 Joe
There was this bartender, Sammy, who years ago refused to call me byanything other than "that guy Joe". Not just "Joe" or "Hey guy", just "thatguy Joe". Well, hell it sounded like a good domain name to me. I reallydon't think he ever even knew my last name. Didn't matter, he was a greatbartender. He could get anybody to talk to anybody while they were sittingat his bar.

Well, all good things had to come to an end. Amongst other issues, one nightsomeone put this dent into the Brooklyn Beer pedestal when Sammy wasworking. He got the boot a bit later. But everytime I see that dent, I thinkof Sammy.

Cheers Sammy!
⇦ go back to that other thing | surprise me | tell me more ⇨