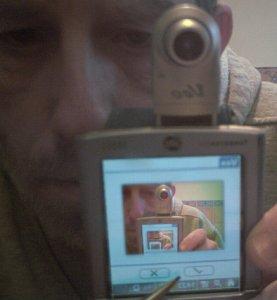 Felix Grant
My bathroom, Weston-super-Mare, UK
The last visible dog
A picture in a picture in a picture ... like the ones on the back of a cereal packet when I was about four years old. The title comes from Russell Hoban's The Mouse And His Child and, like the picture itself (see below), owes much to Ray Girvan's influence on me.

I got this little camera attachment for my Palm computer purely as a "notebook" for work purposes; but it has grown on me, and taken on a life of its own with projects which only it can tackle. A bit like going back to a Box Brownie, in a way - throwing away obsession with image quality to concentate on the fundamentals of image idea.

This picture is one I've had in mind for some time, since seeing Ray Girvan's Vanishing Point contribution to the Mirror Project (imge number 1994). The Veo attachment swivels 180 degrees on top of the computer, making it very easy.
⇦ go back to that other thing | surprise me | tell me more ⇨