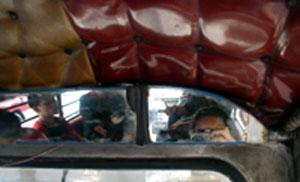 june
Manila, Philippines
On a jeepney
Gotta love the ingenuity of the Filipinos. Originally, a war vehicle used by Americans, the jeepney is now used as a commercial transport vehicle. The body is uniquely Pinoy-created, with the interior often displaying a religious sentiment, from statues of the Virgin Mary on the dashboard to medals of St. Anthony hanging on the rearview mirror.

I was dying to take a mirrorproject photo for the longest time in a jeepney and when i finally took one, it was a disappointment because the jeepney wasn't one of the more flamboyant ones. But you gotta love the roof-top covering. Groovy.
⇦ go back to that other thing | surprise me | tell me more ⇨