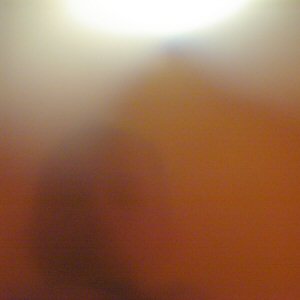 Felix Grant
Weston-super-Mare, UK
50mm, f/0.75 (2)
This is second in a set of three taken in one session before the same mirrorand place as Mirror Project image 18488 (Mask and Mirror).

When cheap digital cameras became available, I started over: drilled out the lens and shutter mechanism to replace them with my own bitsnpieces, or removed just the sensor and electronics for incorporation into a creation of my own. A digital SLR body provides a testbed for all sorts of ideas...

These three were taken with a childs plastic pocket magnifying glass, not mounted on the body in any way but held manually in front of the breech during exposure. Focussing is erratic (and the effective aperture is f/0.75, giving extremely shallow depth of field); the lens wavers in all directions as my hand shakes; stray ambient light spills around the edges. Some image survives because the focal length (50mm) is only slightly greater than the depth of the camera throat, so the very large aperture enables signal to compete with noise to a variable degree.

Ive taken a couple of thousand pictures with this setup, over the past few days, and am not finished yet. An exhibition is growing - but these three were planned specifically for the Mirror Project.
â‡¦ go back to that other thing | surprise me | tell me more â‡¨