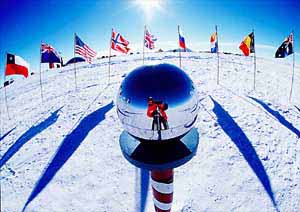 Alexander Colhoun
South Pole
On Dec. 1, 1997 at 9 a.m. sharp my flight to Amundsen-Scott South Pole Station took off from the McMurdo ice-runway. I had 24 precious hours to report on what I discovered there. It was the trip of a lifetime.

The geographic South Pole is no easy destination. A direct trip from Los Angeles to the Pole, with layovers in New Zealand and McMurdo Station would take at least four days. The flight from McMurdo on a ski-equipped LC-130 cargo plane takes four hours. Many flights reach the Pole only to turn around because visibility is too low for landing.

The daily cost of supporting a human being at the South Pole is about $3,000 per day. As such, my trip to the Pole, reporting for the Antarctic Sun was an all out sprint for coverage over my 24-hour window.

Pole activity carries on 24 hours a day during the austral summer to get all the work completed. The sun never sets so theres always plenty of light. During my stay I spoke with astrophysicists, climatologists, ice core drillers and consruction workers, each person a world-class expert in his or her field. In spare moments I ate four meals, slept two hours and walked in every time zone. As I contemplated the South Pole, strolling around the snow-packed site, I better understood what explorers who came before me had experienced. The Antarctic tends to reflect all human emotion. Giving nothing, the Pole becomes a mirror of ourselves and what we make of it.

For me, the Pole was a testimony to mans quest for exploration and knowledge. More lunar colony than human community, the South Pole, especially the people who live and work there, represents the cutting edge of exploration in a world that is rapidly running out of space unknown by the human species.

Under crystal clear skies I photographed the exact site of the geographic South Pole. When finished, I walked in a circle around the marker and joined my friends in different times zones around the planet.

PHOTO BY: ALEXANDER COLHOUN, Copyright 1997 Alexander Colhoun
â‡¦ go back to that other thing | surprise me | tell me more â‡¨