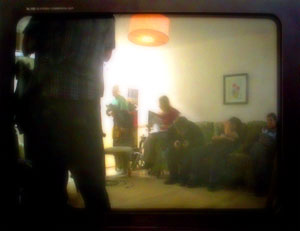 Jon
Toronto, Canada
Look Ma, I'm On TV
I shot this the other week while taking some photographs around the set of a short film my wife Carla was working on.

During a lull in the action, I was sitting on the couch when I noticed you could see everyone's reflection in the television across the room. So I zoomed in and took a couple of quick shots. It was really way too long of an exposure for a handheld (1 second), but the effect was too cool to just pass up.

That's me on the left side of the couch, peering down in to the viewfinder.
⇦ go back to that other thing | surprise me | tell me more ⇨