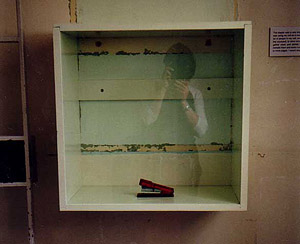 Anthea
Robben Island, South Africa
cell and stapler
Robben Island, which lies 7 kilometres off Cape Town, was Nelson Mandela's "home" - and "home" to the majority of the ANC leadership - for the best part of a generation.

Since the release of Mandela, Govan Mbeki, Walter Sisulu, Ahmed Kathrada, as well as their other less well-known comrades, and the prison's closure, Robben Island has become part museum, part-shrine to the struggle against Apartheid.

In each 7ft by 7ft cell, there is nothing but a locker. In each is a singleobject, given by a former prisoner to the museum. These objects representeach man's time on Robben Island. Each object is kept in the cell that manlived in and the locker is flanked by a photograph of the man concerned anda statement from him explaining the significance of the item in the locker.

During his time on the island, the man who gave the stapler was forbidden touse ordinary, everyday objects, like a stapler. To him, a simple staplerrepresented the society which he was barred from being part of - becausehe was black.
â‡¦ go back to that other thing | surprise me | tell me more â‡¨