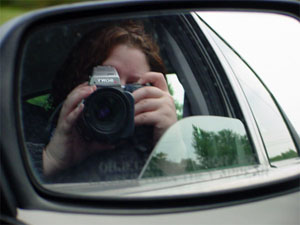 Lynda
Acworth, GA
Closer than he appears
My boyfriend and I met online. After a few months he came to visit me and on the last day he was here, we decided to go to a local park, where we remained until he needed to catch his plane. It was a beautiful day, filled with a thousand good-byes, hugs and tears. It was a day that lasted a million lifetimes.

This picture was taken driving away from that park on an entirely different day. I was in the passenger seat because my boyfriend, who had long since moved to be with me, was driving the car.

I was with the same man, wearing the same shirt and riding along in the same weather as the sad, sad day we said our first good-bye. There would be no good-byes on this day, though.

Just a long, wonderfuly ride home.
⇦ go back to that other thing | surprise me | tell me more ⇨