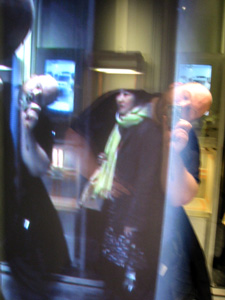 Evan Izer
New York City
Prada
This photo is not manipulated in any way, other than being compressed down to the regulation size for this site. Alice Wu and I were visiting the Prada store in SoHo, NYC and decided to take some pictures. The store is a perfect "Mirror Project" place, a fantasy land of mirrors, LCD screens, maze-like merch rooms, and the coolest dressing rooms on planet Earth. This picture was taken in one of the dressing rooms. There was a mirrored wall which had a spot where the mirroring faded into clear glass, behind which was a large video monitor. The monitor showed images from a camera behind us, thus rendering both front and back views. There was also a nook where you could hang a garment, which contained sensors that read a tag on the garment and displayed images of the garment being modelled by someone much prettier than yourself on the monitor in the mirror. A head trip.
The doors of the dressing rooms are large sliding glass doors, like the ones in supermarkets, except for one difference: once you are inside, you step on a plastic pod on the floor and the glass instantly fogs up, rendering the room private, and also locking the door.
⇦ go back to that other thing | surprise me | tell me more ⇨