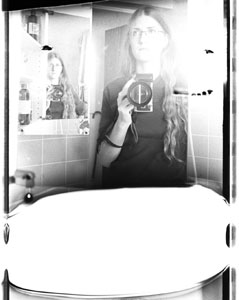 Josefin Peciva
Gbg, Sweden
My grandfather's mirror
In the double mirrors of my grandfather's bathroom cabinet. The neg was damaged during processing and carelessly cut, I wasn't going to keep it.

Turns out it's the only pic I have to use as an excuse for including this poem, though I don't presume to think of it as any kind of illustration. Besides it's one of the few where my face isn't hidden by the camera. Granddad died the following November.

THE FURIES ARE AT HOME IN THE MIRROR;
IT IS THEIR ADDRESS. EVEN THE CLEAREST
WATER, IF DEEP ENOUGH CAN DROWN.
NEVER THINK TO SURPRISE THEM. YOUR
FACE APPROACHING EVER SO FRIENDLY IS
THE WHITE FLAG THEY IGNORE. THERE IS
NO TRUCE WITH THE FURIES. A MIRROR'S
TEMPERATURE IS ALWAYS AT ZERO. IT IS
ICE IN THE VEINS. ITS CAMERA IS AN X-RAY.
IT IS A CHALICE HELD OUT TO YOU IN SILENT
COMMUNION, WHERE GASPINGLY YOU
PARTAKE OF A SHIFTING IDENTITY NEVER
YOUR OWN.

R. S. THOMAS
FROM NO TRUCE WITH THE FURIES
⇦ go back to that other thing | surprise me | tell me more ⇨