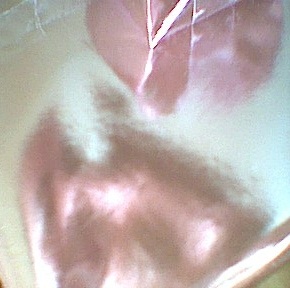 Matt Taylor
London, England
I, Present Too
Another reflection of me in Anna's birthday presents, one of which was a camera identical to the one used to take this picture. The wrapping paper I used was very strange. It had a slight pink hue and was seemingly flat, but had an imperceptible mottled effect that only showed up when objects were reflected in it. Bit of a shame it was probably only appreciated for less than a second before being ripped to shreds, and thrown away moments later.

Camera: L'Espion Matchbox
⇦ go back to that other thing | surprise me | tell me more ⇨