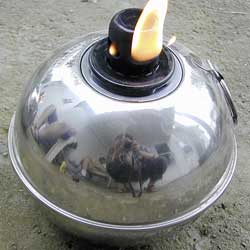 jessamyn
Bakersfield Vermont
T minus 60 and counting
The ramping up to Burning Man frenzy is much more restrained in Vermont than on the West Coast. In fact, when I mention it most people either say "huh?" or "oh yeah I saw that on MTV last year"

This lackadaisicalness was almost catching; I was becoming blase about the entire upcoming event... until I saw myself reflected in this silvery torchlight on my friend's porch and felt that familiar twinge and internal refrain "that would be cool to have on the playa"
⇦ go back to that other thing | surprise me | tell me more ⇨