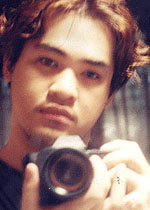 Nelz Agustin
Quezon City, Philipipnes
Ray of Light
This image was taken in 1999, back when I had longer hair, which I permed and colored [having seen Madonna's Florentine tresses in RAY OF LIGHT, I decided to follow suit]. I was just finishing off the roll of film in my camera, and I decided to take a photo of myself with that kind of hair at that period. I normally have black, straight hair, and I think that's the time when my hair was really fried.

I haven't permed or colored my hair in two years after that.
⇦ go back to that other thing | surprise me | tell me more ⇨