We go into the bathroom for specific reasons, usually to leave something behind. But we often leave with something unexpected. The Mirror Project has in some ways given the bathroom a new visual status. When enough WebHeads gather in one place, it's often only a matter of time before a collective idea takes hold. All hands head for the head, casting normal gender concerns to the wayside in order to record the moment for The Mirror Project. But beyond those now standard "group mugs" (as well as the fact such a thing could become "standard"), the Mirror Project has been a catalyst to squeeze amazing quantities of visual interest ... art ... out of such a utilitarian space: the potty. With the inspiration of The Mirror Project, many people have created art in a room designed for flushing crap. Such accomplishments should be noted. Enjoy the Art Potty. 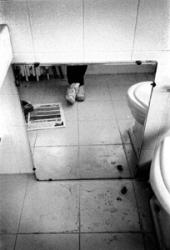